Heavy-load robots speed up handling and make it safer and much more reliable than non-robotized operation.

Where standard industrial robots reach their limits in terms of load carrying capacity and reach, our heavy-duty robots feel at home.

Heavy-load robots of the SLR series are the tools of choice for frequently recurring handling operations, such as the transfer of forgings between the furnace and the press as well as the loading and unloading of rotary hearth furnaces.

They are specially designed for use in forging and ring rolling shops, in other words, for heavy loads, high-temperature environments and applications that require a long reach.

Stationary SLRs are particularly suitable for recurring transfer operations between close locations, such as a press and a nearby furnace. In such an application, a stationary robot is unparalleled in terms of handling precision and speed.

Rail-bound robots on the other hand are able to cover longer distances. A typical application would be the transport of forgings between several process stages.

The benefits at a glance

Its versatile gripper tongs and its wide range of potential uses make the SLR an ideal machine for handling operations in closed-die forging shops. From the blank to the finished forged components most workpieces will be gripped with one and the same tongs. Nevertheless, handling flexibility can be further enhanced by using our quick-change tongs.

The adjustable gripping pressure is particularly useful in ring rolling, to ensure the finished rings will not deform while being transported. 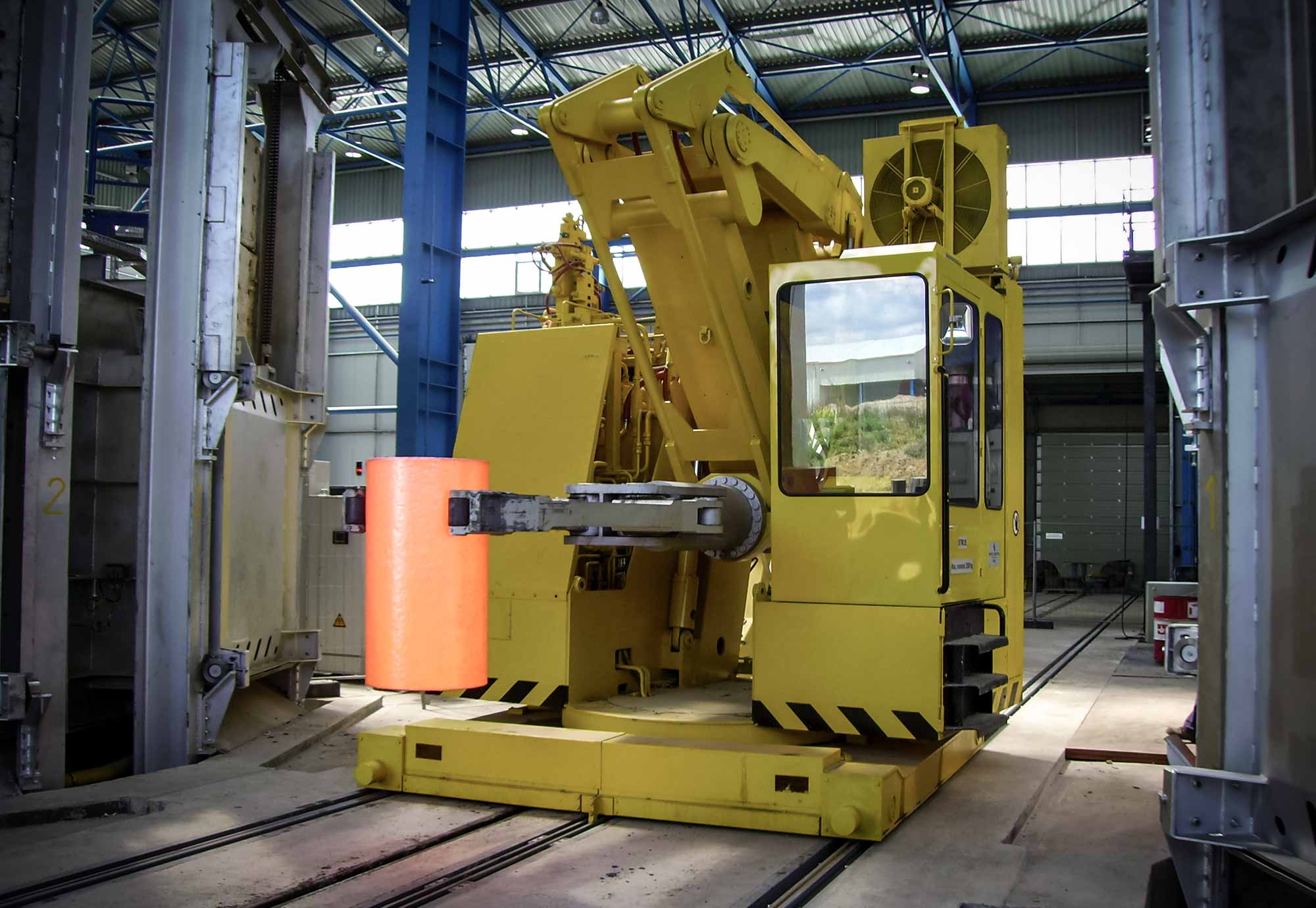 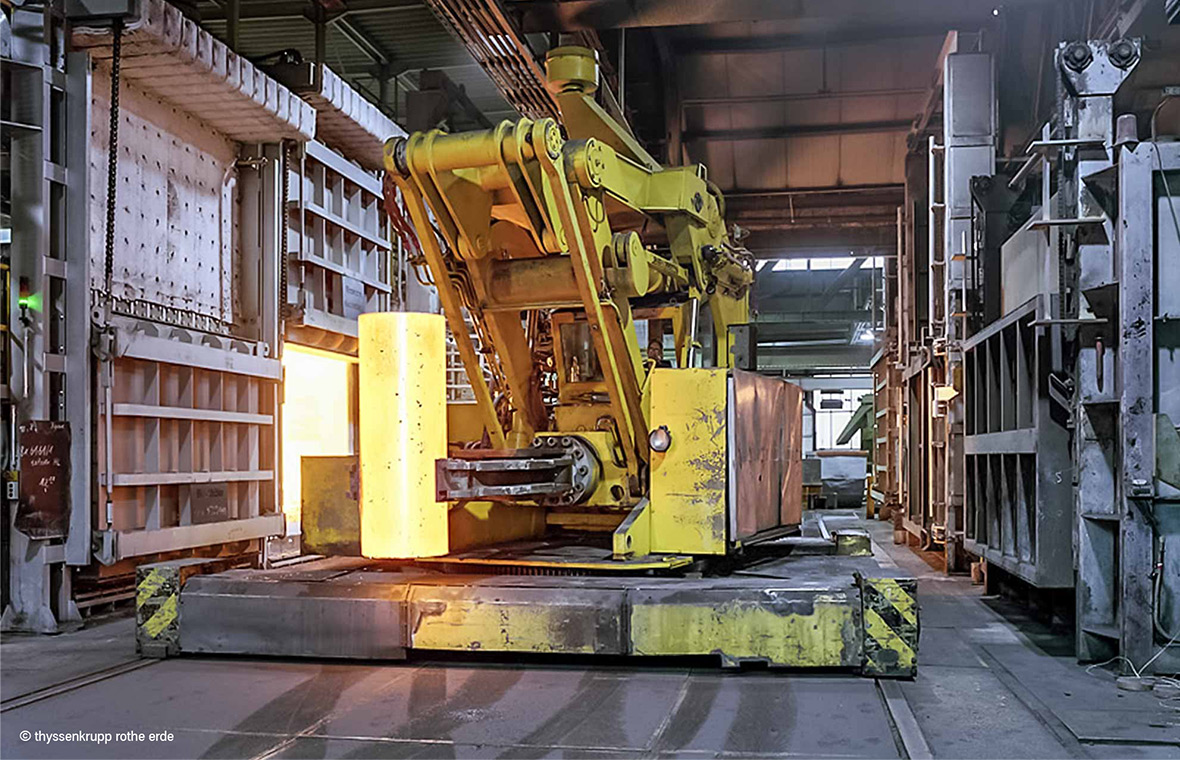 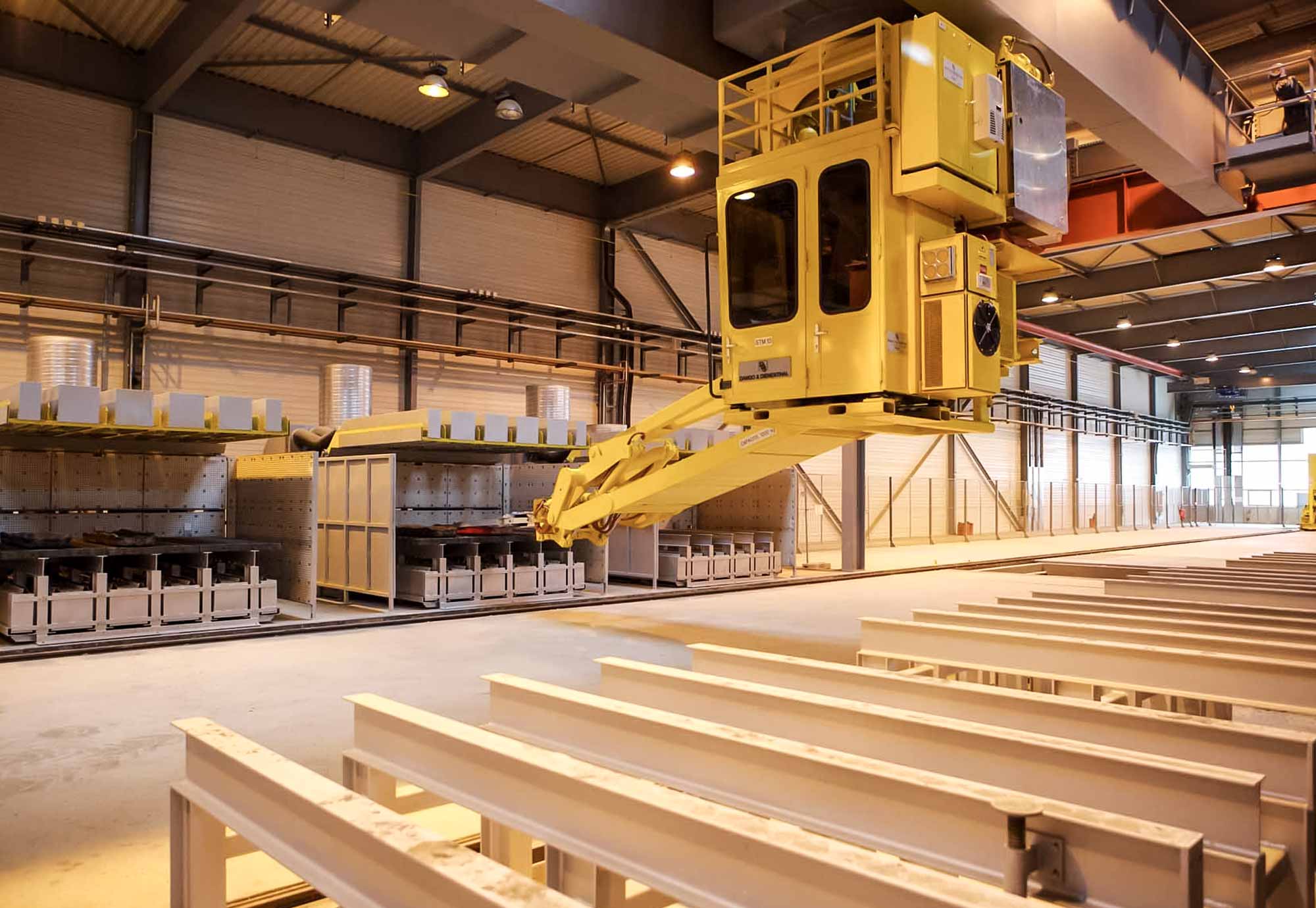 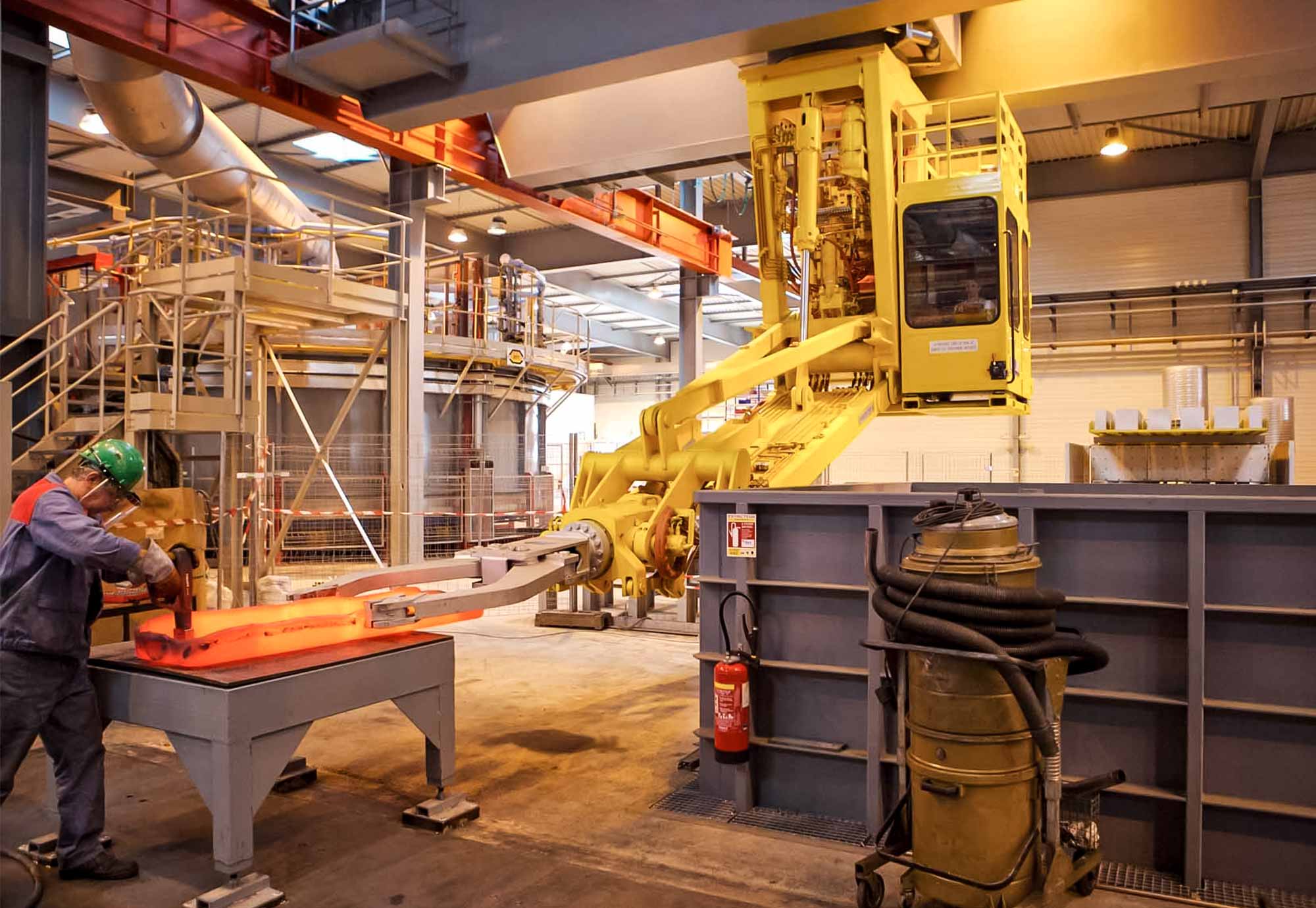 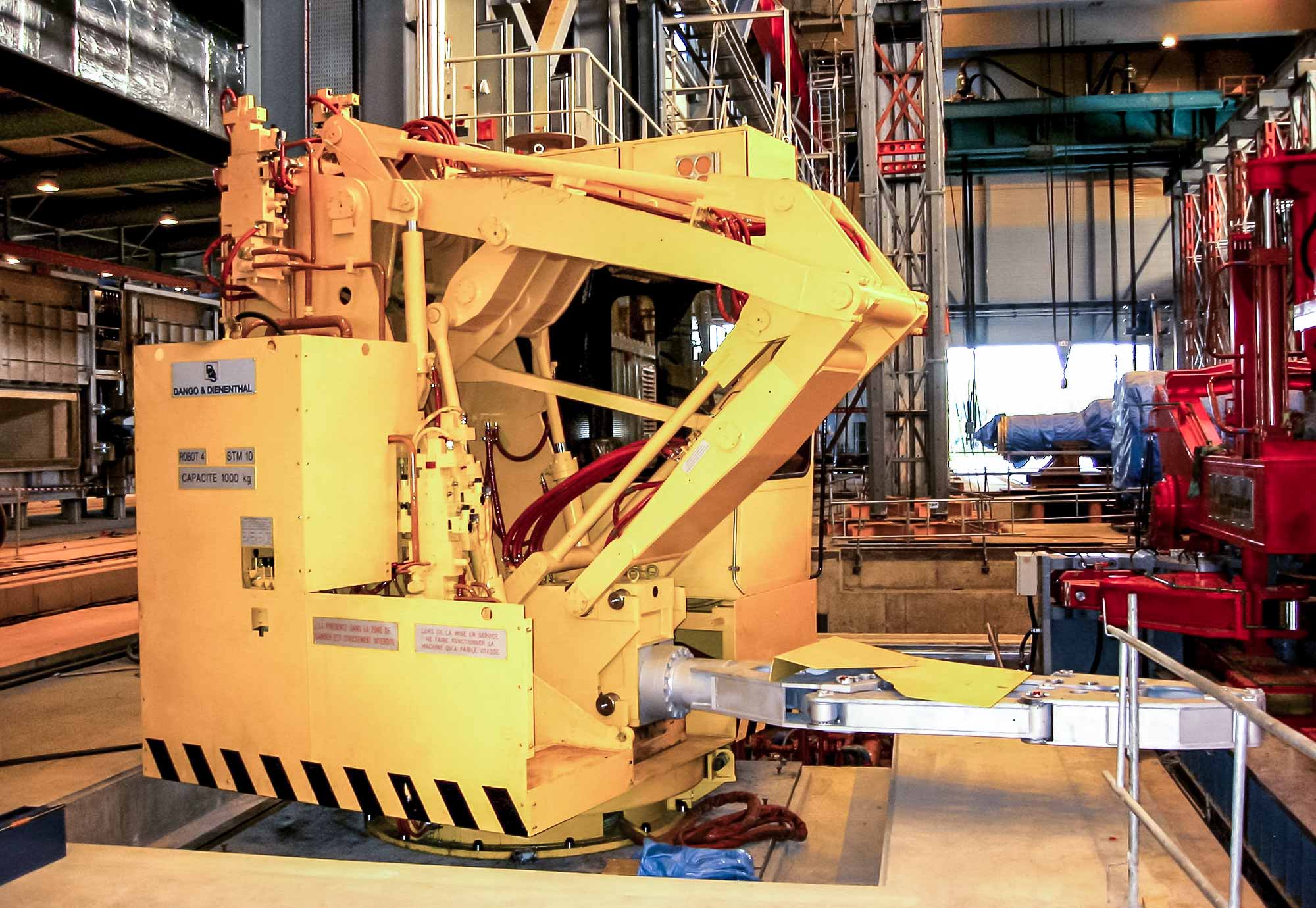 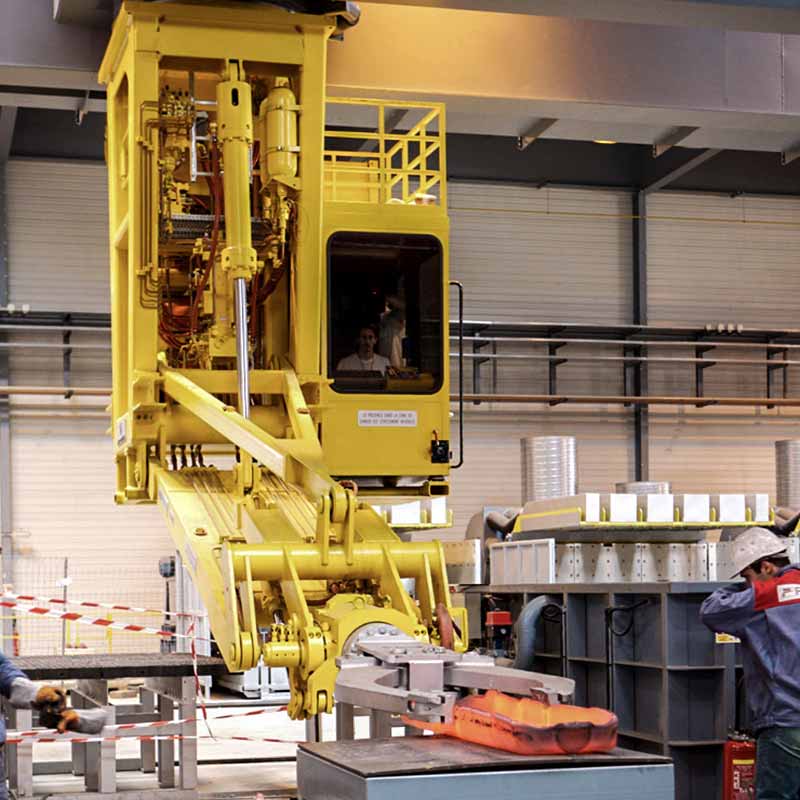 Even with a reach of more than 10 meters, the SLR robot can safely and precisely transfer payloads of up to 50 kN. 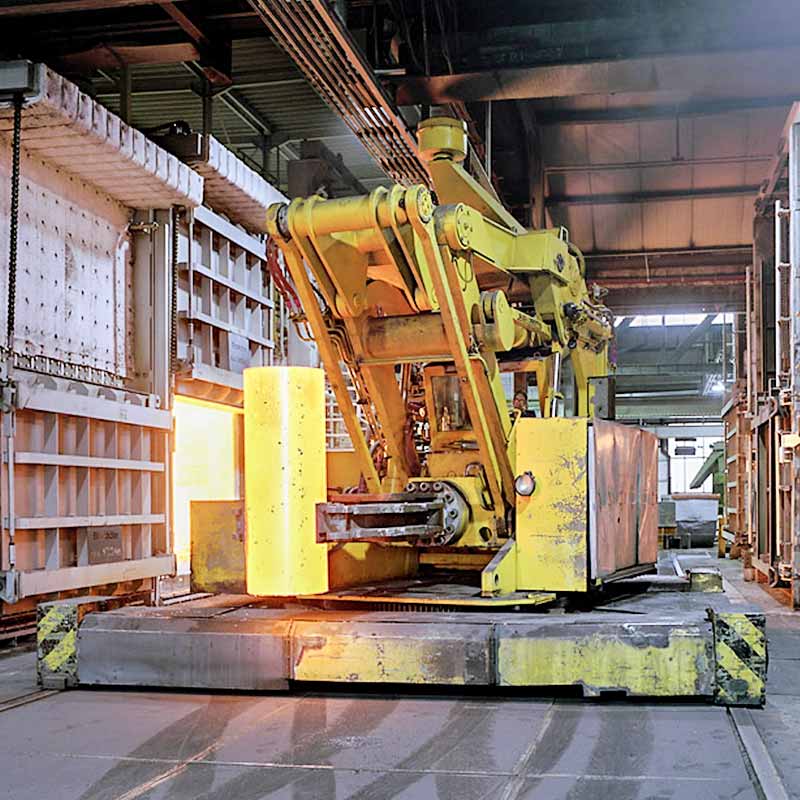 Our heavy-duty robots are designed specifically for use in high-temperature environments and near intensive heat radiation. 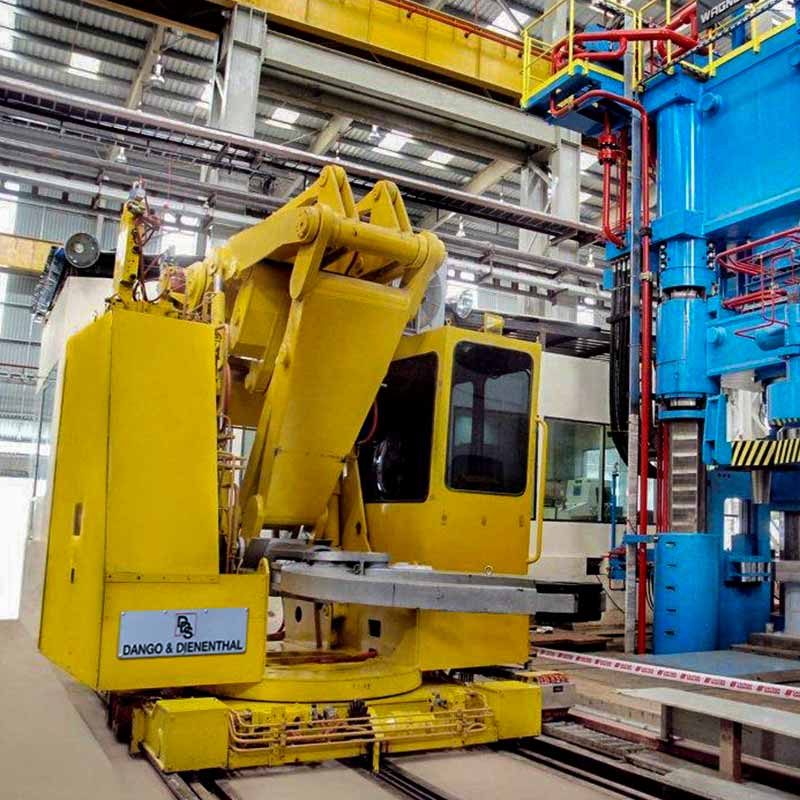 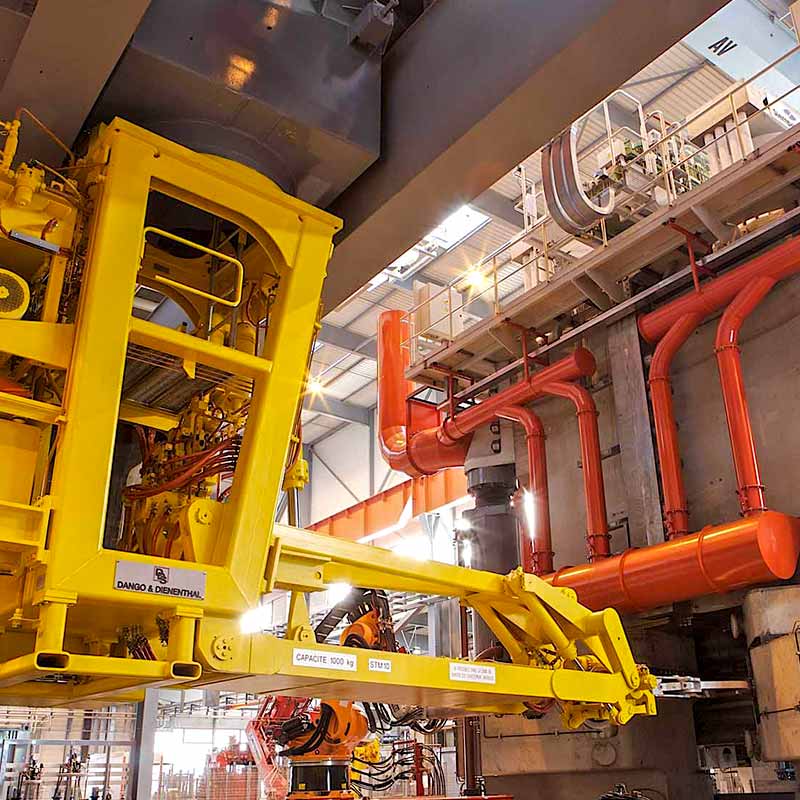 The positively controlled mechanics and the accurate position control assure perfectly linear motion in both horizontal and vertical direction.

The positively controlled mechanics of the lever system and the accurate position control ensure perfectly linear motion of the tongs holder in both horizontal and vertical direction. This is achieved by the combined movement of two mechanically coupled levers. The lever system is torsion-resistant and designed for ease of maintenance.

Thanks to the multi-stage lever system, the SLR is perfectly suitable even for use in areas of very limited space.

For the handling of loads exceeding 15 t our robots are hydraulically actuated. For lower-weight forgings we equip them with innovative electro-mechanical drives.

Using electro-mechanical drives means much less energy consumption thanks to the direct power input – without the detour via a hydraulic system.

Safe hold at all times

We supply the robots with tongs that best meet the specific application. For example:

In addition to opening and closing as well as lifting and lowering, an optional rotary drive enables the robot to rotate the forging through its horizontal axis. Furthermore, the tongs can be tilted to pick up a forging from the floor, for example.

The adjustable clamping force assures that the forgings – rings, for example – do not deform during handling.

Thanks to the choice between three operating modes, the SLR provides maximum flexibility:

The application programs are created and adapted via the touchscreen of the “Mission Editor” or via a mobile panel. Actuation and waiting commands are selected from pulldown menus. Positioning parameters may be entered as absolute or relative values or copied from the current position of the tongs via the teach-in function.

The operator cabin comes with effective noise and heat protection equipment as standard. The cabin can also be fitted with an industrial air conditioning system as an option.

The SLR robots fitted with an electromechanical drive feature low energy consumption. This is because they convert electrical energy directly into motion via the servomotor and/or the spindle.

During braking, the drives operate in generator mode. In other words, they generate power that can be fed to operate other loads via an intermediate circuit.

Max. load capacity of the tongs up to

Max. reach of the tongs up to